Startup Failure Rates: 3 out of every 4 Venture-Backed Startups (75%) Eventually Fail - More Than Accountants Skip to the content
Categories
Entrepreneurship

Startup Failure Rates: 3 out of every 4 Venture-Backed Startups (75%) Eventually Fail

When we see different startups regularly popping up here and there and disrupting their niches or even the whole industries, we rarely think about those that do not make it even close to this point.

About those that miserably fail.

Yes, what we normally do is that we just see the tip of the iceberg. But there is more.

It is not easy to accept but in fact not all those flashy and promising startups actually survive.

More than that, most of them do not survive.

Successful startups bringing in millions and billions in revenue that we see on the surface are in fact only a tiny fraction of the whole startup crowd.

This number is truly shocking. It is perfectly aligned with the real proportions of a real iceberg and its tip (scientifically the tip of the iceberg makes exactly 10% of its total size).

But startups are not small business. Startups are different. Aren’t they?

Well, the facts demonstrate that at least when it comes to the failure rates startups are not much different from small businesses.

Just like small businesses, most startups fail. Surprisingly this also includes venture-backed startups that are supposed to be more sustainable.

First, because they managed to earn the trust of investors and the second, they have access to the venture capital – the cash. These two components are something bootstrapped startups usually lack.

Nevertheless, 75% of venture-backed startups fail and never return cash to their investors. This means that 3 out of every 4 venture-backed companies fail in every possible sense.

Between 30 to 40 percent of them liquidate the assets meaning that the investors lose all their invested money.

These are real-life numbers. The research proving them has been conducted by Professor of Management Practice at Harvard Business School Shikhar Ghosh based on 2000 venture-backed startups who raised at least $1,000,000 between 2004 and 2010.

In contrast, the standard scenarios among venture capitalist with regards to venture-backed startups are as below:

As we see from the scenarios above there are actually two different failure types of a venture-backed startup:

Accordingly, if we broaden the definition of startup failure to include both failure types provided above and apply this to the available data based on Mr. Ghosh’s research then the venture-backed startup failure rate will hit 95%! 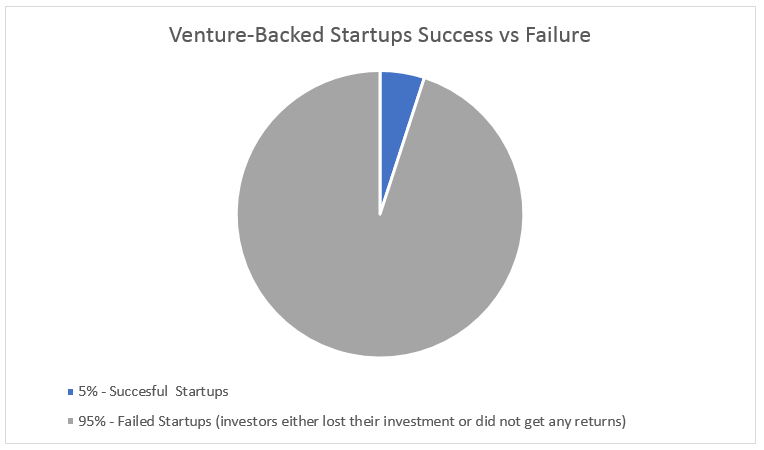 Not Everyone Gets the Same Risks

It worth noting that insane startup failure rates do not affect all stakeholders evenly.

For example, while venture investors suffer a considerable loss both in terms of money and time, venture-backed startup team members risk only the latter. They usually prudently take the chunk from available venture capital to direct it into their salaries.

Thus, in the event of a failure, it’s only the opportunity, time and energy that is lost for them – no capital at risk.

In contrast, this is far from being true when it comes to bootstrapped startups. When a founder borrows money from credit card, friends and family or their savings then things become much more complicated and riskier. Especially, when a bootstrapped startup is firmly heading towards failure.

Venture capitalist usually distribute their capital (and risks) among multiple startups which makes the potential failure of some of those startups to be more or less an acceptable event.

In fact, some venture-backed startups are usually expected to fail, and this is something that calculations and projections include in advance. The failure of some startups is covered by the success of others even with 95% against 5% ratio

On the other hand, a bootstrapped startup has only one shot to succeed. If that is gone then there is no other opportunity left for it to compensate for the failure.

What is even worse with the failure of bootstrapped startups is the fact that they fail more often compared to venture-backed companies.

One major reason for this is because the bootstrapped startup usually does not have enough cash to keep going when a business does not bring in enough revenue.

Accordingly, bootstrapped startups in such scenario do not have the opportunity to fix or change the course of their business – their burn rate does not let them do this while for venture-backed companies this is something they can do.

In contrast with bootstrapped startups, venture-backed companies have access to bigger capital (sometimes within the guaranteed time period) to make the necessary alterations and changes in order to save their business from potential failure.

Thus, venture-backed startups that fail usually do so on average after 4 years – when they stop having access to capital.

This is the exact point when venture-backed startups are likely to exhaust all of their chances to avoid failure.

At the same time, when these two forms of startup financing (venture capital and bootstrapping) are compared the potential rewards must be taken into account too.

A bootstrapped company while associated with limited resources and higher risks will most likely bring much better rewards if successful. On the contrary, venture-backed startups even when insanely successful share their rewards with a bigger number of stakeholders.

So, to summarize the fundamental investment rule “high risk = more reward” seems to be perfectly valid here as well. 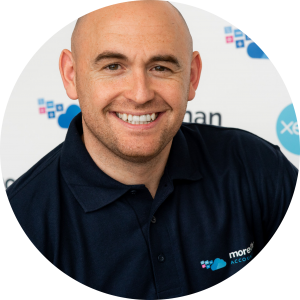 14 replies on “Startup Failure Rates: 3 out of every 4 Venture-Backed Startups (75%) Eventually Fail”

I think many dont plan correctly and that is why the startup fails. With anything it is a risk, you got to take it as it comes but also be prepared. Great article!

Shocking statistics – I knew the failure rate for new businesses was high but I didn’t realise it was this high!

These statistics are a bit surprising! I didn’t failure rate for new businesses was so high! I learned a lot from reading this.

Wow. I didn’t know a lot of these facts. I think people fail because they don’t have a clear plan.

I believe many make the mistake of only looking at the finish line and not all of the challenges to make it happen. Without a good plan and a backup plan, it’s hard to reach success.

I think failure to plan is def a reason that businesses don’t do well! This is a really interesting perspective!

I didn’t realize the numbers were so high! My husband and I have been working for ourselves for over two years, but it’s just the two of us, we don’t have anyone backing the business. I feel like a lot of businesses fail because they don’t plan properly.

These results are much higher than I would anticipate, but I guess it makes sense. I was happy to see that 30-40% return the investment.

Wow, I really had no idea about these statistics. It is certainly a big risk to start a start-up!

Yes, the failure rate is very high and that is why it takes tenacity and a stick to it spirit to keep going or to start again. I commend entrepreneurs.

Startups is the most important thing everyone should focus on and make sure it is correctly done.

I sure believe this! It is so hard to make a successful business. But you just have to keep on trying again!

Sadly so many businesses do fail in the early stages. I think good planning is key and if you do fail dont give up xx

Having a plan incase of failure is so very important. I think that so many depend on their first course of action working.